What started out as a public policy dilemma for Haywood County Sheriff Greg Christopher in 2013 ended up as a broad-based community effort that promises to be a game changer as far as saving tax dollars and offering options for ex-offenders and those without homes.

Upon taking office in March 2013, Christopher was faced with a burgeoning jail population and a shortage of space.

A feasibility study showed converting the two dormitories in the former Hazelwood prison into a 48-bed satellite jail would cost $500,000 and require a second around-the-clock security staff. The idea was quickly discarded, and left Christopher back at square one.

“The cost to the county to house an inmate is $55 a day,” Christopher said. “I knew we had to get a grasp on this situation We couldn’t afford more jail cells, so the only other option was to reduce recidivism and keep people out of jail.”

Early this year, Christopher teamed up with  representatives from Next Step Ministries and Nick Honerkamp, the pastor of New Covenant Church in Clyde who helped start the homeless shelter in Haywood County six years ago. The shelter has operated between November and April for the past six years, and was losing its lease.

“The sheriff had this vision to start a halfway house and asked if we wanted a permanent home for the shelter,” Honerkamp said. “The sheriff didn’t know about the lease at the time. It was a divine opportunity for the homeless shelter. That’s how I knew it was our move.” 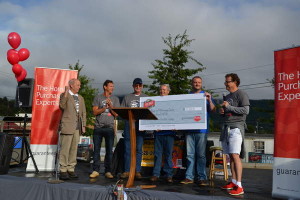 “It was just a given — a glove that fit,” said Perry Hines, director of the Open Door. “We felt in our hearts it was time to make a move and go where the need it. We wanted to be part of this new thing God is doing.”

Additionally, Hines noted that those who will be occupying the shelter are the people the Open Door has been ministering to for years.

“That is our family,” he said. “A lot of times, we are the first contact — the service hub.”

The three organizations began working together and decided the former Hazelwood prison, right next to the county jail, would be the ideal location for the undertaking.

It was a national contest that catapulted the idea of turning a place that used to house prisoners into a place of hope for ex-offenders and those without a home into a community-wide cause.

Patsy Dowling, executive director of Mountain Projects, remembered reading about the contest that promised $50,000 to the winner, plus a visit from Ty Pennington, who would help with the project for a day.

The Haywood application was submitted on May 25, two months after the Guaranteed Rate Ultimate Neighborhood Giveback Challenge started. In the first weekend, Haywood’s project had more online votes than any of the 238 applicants.

It was during preparations for a video required to enter the second round of voting that the vision for the Haywood Pathways Center was fully articulated and shared nationwide. The Haywoodproject maintained its lead through three rounds of voting and ended up winning the grand prize — $50,000 and the publicity generated by having Ty Pennington work in the community for a day.

While the $50,000 was a huge help toward completing project, said Honerkamp, it was the local support that galvanized around winning the challenge that was key to its ultimate success.

The project turned out to be an ideal partnership between local government, local residents and the greater church community that saw the effort as a way to fulfill its mission to serve others.

County commissioners approved a 20-year lease on a portion of the prison property while County Maintenance Supervisor Dale Burris volunteered to act as the project contractor, which ensured work at the site, much of which was done by volunteers, met the county’s quality standard and building codes. The town of Waynesville contributed $20,000 plus supported the project in numerous ways, and the other municipalities in the county gave a financial contribution and volunteered time to help.

Numerous business owners stepped up to donate labor or provide deeply discounted materials and supplies, while volunteer labor helped complete the project within budget and in time for the early November opening. (The soup kitchen is projected to open in early January.)

Dowling said she was amazed at the number of invoices she paid where the full amount provided was shown, but the amount for labor was taken off.

Volunteers joined together to organize fundraisers, all supported by community residents who also gave generously to the cause.

In the end, about $390,000 was raised in just six months to convert the long-closed prison into a center with both a men’s and women’s dormitory, as well as a kitchen where not only those living at the site would eat, and a place where the greater community of those struggling to make ends meet could enjoy an evening meal.

Honerkamp admits the journey has been messy at times, with plenty of ups and downs.

“When people say, ‘you shouldn’t have done it like that,’ my favorite response is, ‘next time we flip a prison, we’ll do it differently.’ We just didn’t know any better,” Honerkamp said.

The county estimate was $500,000 to bring two dormitories in the old prison up to state code to house prisoners. The three organizations that now occupy the Pathways center renovated the two dormitories, revamped and equipped the kitchen and added another building for restrooms and a laundry area all for about $370,000.

“What’s unusual is that this is three organizations, not one, “ Honerkamp said. “There is no formal board or bylaws or manner in which decisions are made, so the community leaders who came together to make this happen had to be very flexible — they had to submit to the common good. That leadership model very rarely used.”

Jim Haynes, the Next Step Ministries liaison who spent was at the Pathways center daily during the construction process, said it was almost unbelievable the project was completed as quickly as it was.

“We were pushed by the Ty Pennington event and by the need to get the shelter open by early November,” he said. “We missed a few deadlines, but considering a whole lot was done with volunteer help, we are a lot farther along than I thought we would be.”

In less than a year, the Pathways center went from an idea to operation mode, something that is almost unheard of for a vision of this size and scope.

Throughout the project, those at the project’s helm often referred to the way everything was falling into place as a “God thing.”

“God was behind this project at every step,” Hines said. “This is three autonomous ministries working together for a dedicated purpose. We saw God moving in the way we converged together in such a powerful way. We’re helping provide for the physical needs while the shelter and Next Step are taking care of the totality of needs.”

Until the kitchen opens, the center is simply operating as the homeless shelter did in the past — by providing a place to spend the night out of the cold. But once the kitchen opens, the ministry model will kick in. That includes a policy allowing anyone who is  drug and alcohol free to stay at the shelter for three days.

Haynes is anxious for the ministry/counseling aspect of the program to kick in.

“We’ve not yet spent enough time on the ministry side,” said Haynes. “If we fail at that, this work on the construction means nothing.”

“We’re doing things that will help them for the rest of their lives,” he said. “That’s the heart of the matter. If they can take care of themselves and their family, then the rest of us aren’t having to.”

The sheriff has already seen some reduction in recidivism as the result of the 175 individuals active in Haywood’s jail ministry — one he said his the largest per capita in the state.

“Many of the people who are listening to the jail ministers are starting to change their lives,” Christopher said. “When they get out of jail, mentors continue to work with them and even help them find a job.”

When Christopher speaks to groups about the Haywood Pathways Center, he often tells the story of finding two recently released prisoners sitting along the sidewalk outside the jail. When he asked them what they were going to do next, they had no idea — and no options.

Christopher personally paid to put them up in a motel and helped them find a job (something the humble sheriff fails to mention in his talks) and came to fully understand the scope of the problem in that encounter.

What has happened over the past year with the Pathways center is something he said “blows my mind.”

“From just an idea I believe was divinely spoken into my heart to seeing what can happen when an entire community comes together to love their neighbor as themselves absolutely inspires me to keep working harder than I have ever worked,” Christopher said.

Honerkamp marvels at the ways community members have risen to the occasion at just the right juncture to make the project a success.

“It’s incredible the different people who came to table to lead different parts of this project,” Honerkamp said, adding that about a third of the volunteers were college age or younger. “Just think about it. We brought a community together, and we flipped a prison. It is amazing.”