100% Actively Engaged in Recovery at Time of Release

COVID continued to affect our ability to fully implement our programming in 2021. We are grateful for the cook teams, interns, student groups, class facilitators and chaplains who were able to return. We hope 2022 brings us the opportunity to see all of you!
The 2021 Year in Review.

The idea of the Haywood Pathways Center began in early 2014 when two men were released from the local jail. The Haywood County Sheriff watched as they walked out the doors and sat down on the sidewalk in front of the building. He walked outside and asked them where they were going. The men replied they had nowhere to go except the same places that brought them trouble and got them to put in jail in the first place. Looking over at the empty, unused former prison facility, the sheriff wondered, “What if the very walls used to punish those who had committed crimes could be used as a place to help those, without hope, find a lifeline?” 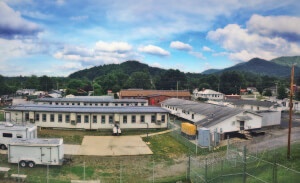 Also in 2014, the Haywood Christian Emergency Shelter, which had operated as a cold weather shelter in Haywood County since 2009, learned it was no longer going to be able to lease the building it had been using for the shelter in the winter months. In talks between the President of the homeless shelter and the Haywood County Sheriff, a vision began to take form- transitional housing for individuals being released from jail with no place to go and a year-round shelter for the homeless.

The combination of a sheriff who was tired of arresting the same people over and over, a need for a place for a homeless shelter, a community kitchen willing to expand, the commitment of numerous volunteers, town and county officials, churches, businesses, and organizations came together and the vision became a plan. Haywood Christian Emergency Shelter, Next Step Ministries and The Open Door accepted the challenge and became the three agencies around which all others could gather.

With a plan in place, the next step was to raise funds—and it needed to happen quickly. Without a place to house the homeless shelter, the winter of 2014 was going to be very difficult and dangerous for the homeless in Haywood County.  Fundraising began in earnest, but what was needed was a big boost—something to really kick everything off. Learning of an online voting contest; The Ty Pennington Guaranteed Rate Ultimate Neighborhood Giveback Challenge, the three groups decided to enter – even though it was late in the game and the odds were against them.  Haywood County residents rose to the challenge and Haywood Pathways Center won out over 300 other entries for a $ 50,000 prize and a visit from Ty Pennington to “Flip the Prison.”

“Motivating a community, having people rally and want to do something positive, sometimes all you need is a belief in yourself, that you can do it.
What has blown me away is that these guys have really convinced a lot of people that this is going to be a phenomenal thing.”
— Ty Pennington

After the September 25, 2014 kickoff with Ty Pennington where more than 1000 volunteers came together to renovate the old prison, the effort continued to raise funds and complete the work needed to open the doors before winter. In less than a year after conception, Haywood Pathways Center opened the doors to their first guests on November 15, 2014. Although the kitchen still was not ready, and guests had to be transported to The Open Door for meals, they had a warm place to stay during those cold winter nights. On January 5, 2015, the kitchen was ready, and the first meal was served. Haywood Pathways Center was fully operational from that moment on.

In the time since the opening, Haywood Christian Emergency Shelter and Next Step Ministries have dissolved to become one with Haywood Pathways Center, a 501 (c) 3 nonprofit organization. Although The Open Door continues to operate separately, they work closely with Haywood Pathways Center to feed, not only the guests at the facility, but the needy in the community as well. An Executive Director, Community Liaison, three full time and three part-time staff carry out the day to day operations at the shelter and oversee programs that are designed to help individuals get back on their feet and become self-sustaining members of our community.

112 reunited/moved back in with family

90% of “exited” engaged in recovery at exit (inpatient, intensive outpatient, and/or 12-step groups)