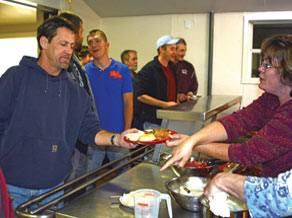 Dinnertime came a little late at Haywood Pathways Center Sunday night (Jan. 4), but for all the right reasons. It was the inaugural night for The Open Door’s Hazelwood kitchen, the final piece in turning the dream behind the Pathways Center into reality.

“It might be a few minutes before we get to the pork chops,” said Jeremy Parton, Haywood Pathways’ newly hired kitchen and shelter director. “They might be a little cold, but that’s going to be OK, because there’s not going to be another night like this.”

So, instead of making a bee-line toward the plates of mashed potatoes, biscuits, pork chops, green beans and gravy, the roomful of shelter residents and volunteers circled the room to join hands in prayer. People from all walks of life spoke up to share their thanks for the food, the building and the people inside it.

“You come to be a blessing, but I want to tell you guys that you’ve already been a blessing to us,” said Mark Caldwell, pastor of North Canton Baptist Church, which had provided the volunteers for the evening and also helped out in December at the Frog Level location.

It’s ironic, Caldwell said, that North Canton wound up staffing the inaugural meal at the Pathways Center, because just eight years ago he’d gotten a phone call to provide volunteers for another first — shuttling homeless folks to a wintertime shelter at Camp New Life, a shelter that now exists year-round at the Pathways Center.

“You’re not here by coincidence today,” Caldwell told the room. “You’re here because God knew where you was going to be today.”

That’s a statement that rang true for Calvin Mann, of Canton, who’s been staying at the Pathways Center for about two weeks. As Caldwell concluded his before-dinner devotional with an invitation to follow Jesus, Mann raised his hand, and a group clustered around to pray with him.

He’d been saved at age 12, but “I’ve been through a lot since then, and it’s always good to rededicate your life,” said Mann, 46.

Things are looking up for Mann, who had struggled with alcohol abuse and eventually found himself homeless. He’s proud of how well he’s been able to stay sober since coming to the Pathways Center, and he’s grateful for the safety and warmth that Pathways provides. He’s also looking forward to the future.

“I start a new job next week over here at HVO [Haywood Vocational Opportunities], so things are looking up for me,” he said. “I’m wanting to be out of here in a couple months and come volunteer for them.”

And he doesn’t plan to forget the group of people he’s been bunking with lately.

“They’re my new brothers, my new family,” he said.

Jordan Becker, 24, hadn’t been there long enough to say the same thing by Sunday night — it was only his second day at the Pathways Center. But he likes what he sees.

The meal was “delicious,” Becker said, and he’s hopeful that this stay at the Pathways Center will be just what he needs to get back on his feet. Smoking weed has been his big problem, and it had been too hard to stop while living surrounded by it. Here, he’s surrounded by encouragement to make the right choices and pursue the future he hopes for.

Becker and Mann are two of about 20 people staying at Haywood Pathways this weekend, a number that Nick Honerkamp, president of the homeless shelter’s board of directors, said is close to the all-time high since the shelter opened on a winter-only basis at Camp New Life in 2008. He speculated the high numbers could be due to all the media exposure the center has gotten, the quality of the facilities and the new focus on rehabilitation rather than just on providing a warm place to sleep.

“There’s several guys that are very employable that just needed a safety net,” Honerkamp said.  “There are other folks that just need more ongoing care.”

For each person, the path to independence will be different.

“Each one of us is in a different walk of life and each one of us has our own problems, but I don’t think God positioned any of us here by mistake,” Parton said Sunday night. “We’re here for such a time as this and we’re going to build this thing a brick at a time.”

Case in point: The path to the kitchen’s opening. The whole week of Dec. 29, a team of residents at Haywood Pathways worked nine-hour days to clean the building, stock the shelves and make sure everything was in working order for opening day Jan. 4.

“It’s been amazing to watch it come together with the help of the people who are here,” Parton said. “Without them we wouldn’t have got it open.”

Not to mention, of course, the months of work that went into Haywood Pathways before that — negotiations between nonprofits and municipal governments, donations from businesses and individuals across the region, countless hours of volunteer labor and other contributions too numerous to list.

But Sunday night’s plate of pork chops and potatoes wasn’t the end of a year-long story. Rather, it was the bridge between preface and narrative, the start of a saga that will be written in chapters titled by lives changed and hurdles overcome.

“The construction’s done. Now we’re going to start building the rest of it a brick at a time,” Parton said. “What’s going to be awesome one day is when you come out of here and you get that job and you get reunited with your family and you look back and say, ‘You know what? I was there when that thing first started.’”

Haywood Pathways Center is a location, but the heart behind it comes from the three organizations that inhabit its walls: Haywood Christian Emergency Shelter, The Open Door and Next Step Ministries. The homeless shelter, soup kitchen and halfway house may operate on the same campus, but each has its own specific purpose and its own specific plan. Now that the bulk of the construction is done and the facilities are set up, the three ministries can focus on implementing the programs they’ve spent the past year planning.

The homeless shelter’s working with a tiered set of programs. Anyone who needs a place to spend the night is welcome to come sleep there for up to three nights as long as they’re mentally stable and not using drugs or alcohol. They’ll also have to show photo ID to prove that they’re Haywood County residents and not wanted by police.

But after that they’ll have to commit to a 21-day program if they want to stay at Haywood Pathways. That entails sitting down with a counselor to come up with a personal growth plan. They’ll have to spend at least 20 hours per week working or volunteering with a nonprofit, continue to stay clean and sober and abide by house rules.

“If they show progress, if they show some initiative they’re willing to help themselves, we’ll allow them to sign up for our six-month program,” said Nick Honerkamp, president of the homeless shelter’s board of directors.

The six-month program is done through LifeWorks, a Christian organization that helps equip struggling people with the skills to take care of themselves. The end goal of the program is for its participants to leave the homeless shelter as people who have a home and niche in the community to call their own. The program includes components such as classes on how to write a resumé, dress appropriately and make a budget as well as partnerships with other area business and organizations to help clients learn job skills and find work. Residents are also paired with a volunteer from the community who mentors them, helping them pursue their goals.

The daily routine, shared by Next Step residents, will help keep residents focused on their goals. Lights go on at 6 a.m. each day, and the campus closes from 9 a.m. to 5 p.m. while residents are out working, volunteering or otherwise working toward their goals. Every morning they’re expected to shower, make their beds and prepare their own meal. Every evening they’ll have to clean the dormitory. A security guard will keep watch each evening, take their cell phones at 9:45 p.m. and lights will go out at 10 p.m.

The Open Door already has a kitchen at Frog Level in Waynesville, but the new kitchen in Hazelwood will give the Pathways Center a more homelike feel by having food on-site. It will eventually extend the dinner invitation to Hazelwood residents who could use a free meal but might have trouble making it to Frog Level.

“There’s a great need for food, for assistance in all the tangible ways in Haywood County, so the extra meal can obviously help a lot of people who are struggling, having to buy fuel oil instead of food,” said Perry Hines, Open Door director.

By mid-February, the dinner invitation will be open to anyone who wants to come in. But for now, the kitchen’s for Pathways residents only as staff get the routine established.

And what is that routine? Area churches — or any other organization that wants to help out — will take turns preparing dinner for a week at a time, with about 10 people needed each night. Groups arrive at the center between 4:30 and 5 p.m. to start cooking and serve the meal and a devotional at 6 p.m.

Shelter residents take ownership of their own breakfast and lunch.

“He [Parton] will be responsible to make sure that they’ll have everything they need to do breakfast, and we’ll have a bag lunch offered to everyone so they can take their bag lunch,” Hines explained.

People who have just gotten out of prison or jail will have the chance to enroll in Next Step Ministries, a program designed to help people transition from life behind bars to success on the outside.

Like the homeless shelter, Next Step uses a program from Lifeworks. The 28-week program involves making and pursuing an individualized plan with a Lifeworks counselor, whether that entails job training, education or rehabilitation. The participants sign a contract that outlines what’s expected of them to graduate from the program.

The program also relies on volunteers to mentor those in the program. Mentors and mentees have a face-to-face meeting once per week, and the pair catch up by phone every day.

Next Step also seeks out community partners who can offer a job or provide training to residents.

“It’s hard for felons to get a job, but we’ve had some folks say they’ve got a shift now that maybe someone would want to try their hand at becoming a chef or a cook,” said Jim Haynes, president of Next Step.

When the 28 weeks are up, the goal is for residents to be able to move out on their own. But Next Step doesn’t plan to cut the cord entirely.

“We plan to track these folks, and hopefully the mentors will keep in touch with them,” Haynes said. “They’re still wobbly. They’re on their feet, but they’re wobbly.”

It’s not easy to transform from convicted criminal to productive citizen. But Haynes believes that with a supportive community, spiritual power and the desire for success, it’s completely possible.

“Those folks that have a real desire to change,” he said, “there is hope for them and I really believe that.”

Haywood Pathways Center has finished fundraising for the first phase of building — all $342,000 of it — but is still looking for contributions toward its operational costs and construction of a parking lot and renovated office space. The tricky part? It’s hard to tell what the price tag will be until they’ve been operating a while.

“Until we wear it for three months, we can’t really project the yearly budget,” said Nick Honerkamp, one of the leaders of the effort.

In addition, the three ministries operating out of the Pathways Center are looking for dollars and volunteers toward their respective missions.