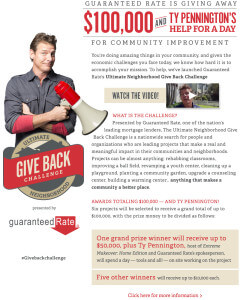 Article Provided by The Mountaineer.

Out of a total of 300 projects from 49 states, the Haywood project skyrocketed to first place in the Facebook voting portion of the contest within just four days of its entry, an entry that was submitted about two months after the challenge began. Haywood maintained its front-runner position from then on.

Voting ended June 9, and the challenge organizers informed Nick Honerkamp, who is chairing the county’s emergency shelter group and is the senior pastor at New Covenant Church, that Haywood is one of 50 semi-finalists.

The next step is submitting a 1- to 3-minute video describing the project’s community impact, the resources and expertise available to pull it off and the expected time frame for completion.

In anticipation of being a semi-finalist, a group of volunteers already made Haywood’s video and the community project is ready for the second round of Facebook voting — and more.

For the purposes of this project, an independent Facebook page titled Haywood Pathways Center has been set up. Those who support the project can like the page, be taken directly to the Guaranteed Rate voting site where each Facebook user can vote once and then keep abreast of continuing developments on the project.

Supporters also have another opportunity, and that is to donate funds to the project by clicking on the “Give Now” blue box that states #Tear Down These Fences — an action that will allow Haywood to show there’s plenty of grassroots financial support for it as well.

The second round of voting is open from June 17 to July 8. The six semi-finalists will be announced on July 15. A grand prize winner will be chosen on Aug. 1.

“This is well-worth celebrating as a community,” Honerkamp said of the Haywood project selection as a semi-finalist. “When we started, our project was number 235, and within four days, we were in first place.”

Honerkamp asks all in the community to share the Haywood Pathways Center Facebook page and to encourage their Facebook friends to vote and pass the information on to others.

“We can make this once in a lifetime opportunity a reality,” he said.