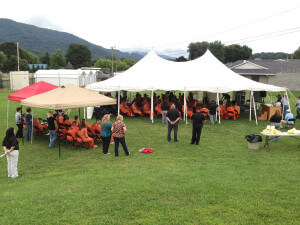 Haywood County Sheriff Greg Christopher told the county commissioners Monday that the jail is on track to bring in significantly more revenue than last year.

Counties are reimbursed $40 a day for housing adult misdemeanants following a state decision to no longer incarcerate this group of inmates at state-operated facilities. This week, Haywood County received a$13,040 check for May expenses in housing inmates under the Statewide Misdemeanant Confinement Program.

“A lot of sheriffs didn’t get into the program,” Christopher said in an interview. “But the cost of the detention staff is the same, whether we have 25 inmates or 125. Plus, the state takes care of medical expenses outside the facility.”

There are other revenue streams Christopher has pursued since taking over as sheriff two years ago. New contracts with a commissary provider and for phone service have boosted revenue and the county keeps overflow prisoners from neighboring counties as well.

A powerpoint presentation at Monday’s meeting showed a total of $63,348 had been generated through April, including $41,000 in state payments, $8,400 for housing inmates from other counties, $4,800 for phone revenues and $6,700 from a percentage of commissary sales.

This compares to $87,000 that was received and deposited into the county coffers last year.

The revenue is just a portion of what it costs to operate a prison, however. The 2015-16 county budget sets aside $2.7 million for jail operations, more than half of which covers staffing for the around-the-clock operation.

The next largest expense is the $379,000 budgeted for the hospitalization contract with an outside company, followed closely by the $210,000 line item for inmate professional care from medical providers. These contracts provide a full-time nurse for inmates, covers hospitalization costs in the event an inmate suffers a heart attack or other major health problem while incarcerated and reduces the county’s civil liability in the jail operation.

The $200,000 tab for food rounds out the major costs for keeping those considered a risk to society off the streets.

The detention center has 92 beds plus another 40 in the jail annex.

Christopher also presented a chart indicating there was a 3.6 percent drop in recidivism, or relapse into criminal behavior, at the county jail. However, he later clarified that tracking re-entry into the system just began several months ago, yet the names of repeat offenders were pulled from the time the software was first used about a decade ago, significantly distorting the picture.

The department is in the process of going back three years to recapture all the data, which will be beneficial not only for obtaining grant funds to help support the program, but should help reduce crime.

“Next year we’ll be able to present statistics for an entire year,” he said. “I’d be surprised  if we didn’t have a drop (in recidivism) of between 10 and 30 percent.”

Christopher spoke about the tremendous impact two programs are having on the lives of those incarcerated in the county jail.

One is Haywood’s jail ministry, which includes 47 churches and 200 volunteers, making it one of the largest in the state.

The other program is the Haywood Pathways Center, with 35 churches that work preparing the evening meal for the 25 or so residents at the homeless shelter located at the long closed state prison that’s just next door.

Since opening late last year, the Haywood Pathways Center has worked with 128 individuals who must be alcohol-free and participate in counseling, rehab or career programs as a condition of staying there.

Of those worked with so far, about 40 percent have already found jobs to support themselves or have been able to move a more permanent home. This, Christopher believes, is the tip of the iceberg as to the positive impact the two programs will have in the community.

“Really, at the end of the day, I think this will help the county tremendously,” Christopher said. “If we can provide a way for people to be with their families, hold down jobs and stay out of jail, well, that is really what it’s all about.”

The commissioners had high praise for the progress made at the department under Christopher’s leadership.

“Sheriff, I appreciate your heart,” said Commissioner Kevin Ensley. “In jail you have a lot of time to think about your life. To allow people who care to come in makes a difference.”

Commissioner Bill Upton said he appreciated the help of inmates who proved to be invaluable during a trash clean-up day.

Christopher said county projects take a priority for his supervised prisoner work team that is considered nonviolent and low flight-risk. Next on the priority list are nonprofits in the county that need an extra hand.

“I appreciate your working with the community as you do,” said Commissioner Kirk Kirkpatrick, noting the action both encourages the individuals and saves the county money.

In other business, commissioners:

• Set a public hearing at 5:30 p.m. June 15 on a financing contract to build a public services training facility at Haywood Community College;

• Adopted a memorandum of understanding for a regional mutual aid agreement among the 17 WNC sheriffs’ offices;

• Approved a one-year lease for $5,555 to Dan and Rhonda Ross for the 22 acres on Jonathan Creek that will eventually be developed into a park.