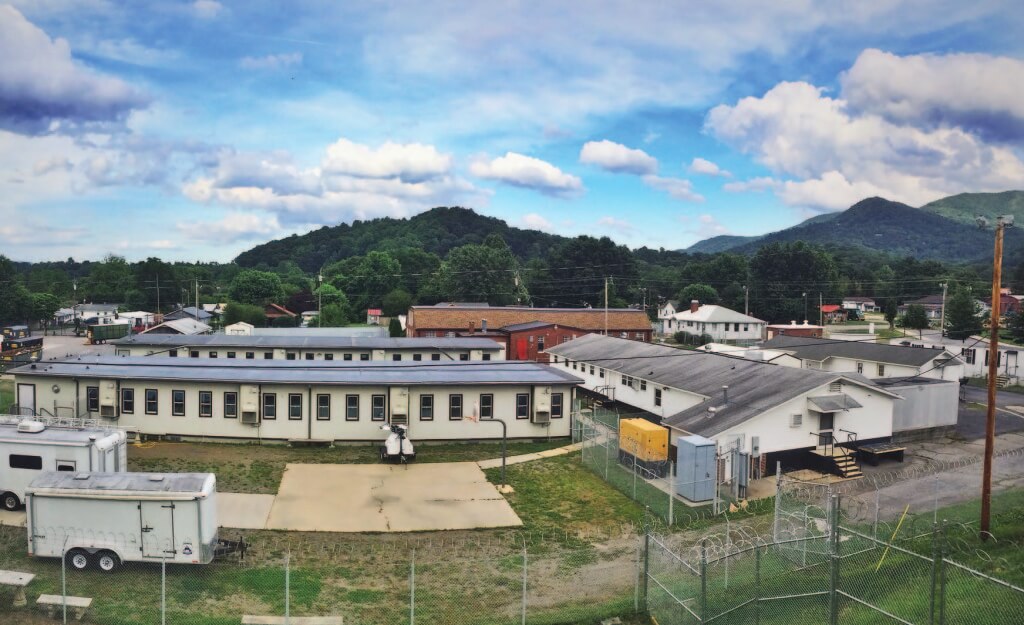 BY HOLLY KAYS
STAFF WRITER It’s going to be an eventful next few days in Waynesville. Haywood Pathways Center is in the final stretch of planning a three-day blitz on the old Hazelwood prison, transforming
the former state detention center into a combined soup kitchen, halfway house and homeless shelter. They’ll be doing it with the help of an army of volunteers, untold gallons of paint and board-feet of wood — and help from TV personality Ty Pennington.
“We’re actually ecstatic about this simply because we see that there is a clear-cut opportunity for people in our county to get the help that they need and it be the help that is going to help for many, many years to come,” said Haywood County Sheriff Greg Christopher. It took tremendous support to even get to this point — Pennington’s visit and accompanying $50,000 in funding are a result of Haywood Pathways having swept a national online voting contest sponsored by home loan company Guaranteed Rate — and support has continued to pour forth as the group prepares for the big day. There’s been so much interest, in fact, that Haywood Pathways had to close the volunteer sign-up for Sept. 25, the day that Pennington will be in Waynesville.
“We got to about 700 and we felt like we needed to be careful not to have too many volunteers on a construction site,” said Nick Honerkamp, one of the leaders of the endeavor. That 700 figure doesn’t even include the hundred-plus students from Western Carolina University who signed up to help. There were so many of them that Haywood Pathways decided to give WCU its own day of
service on Sept. 26.
Lane Perry, Waynesville resident and director of WCU’s center for service learning, is leading that charge. The university expects to be involved for a far longer time period than just Sept. 26. “WCU has really offered their help longterm,” Honerkamp said, citing interest from the school’s criminal justice program in lending their expertise and its entrepreneurship program in helping develop a social enterprise program to help people using the Pathways Center gain job experience.
The third day, Saturday, Sept. 27, will be an open-ended workday for people who didn’t make the Sept. 25 volunteer list to come down and help out. “This truly is Haywood County’s project,
so we want everyone to be able to contribute something,” Honerkamp said. Once the three days are up, Haywood Pathways expects to have restrooms and a laundry room built onto the existing kitchen, floors redone on the male and female dorms, the interiors and exteriors of all three buildings repainted and the prison fence torn down to be replaced with something less institutional-looking. Teams will also be busy working on cleaning, landscaping, plumbing and electrical wiring.
Guaranteed Rate Day, the day Pennington will attend, will start bright and early at 6:30 a.m., when Pennington will give a television interview and do photo ops with sponsors. A sold-out VIP breakfast will give ticket-holders a chance to share a meal with Pennington — a dinner along the same lines will be held later in the day — and at 9 a.m. the event will kick off with proclamations by town officials and presentation of the $50,000 check.
The real work will take place between 9 a.m. and 6 p.m., and not all of it will be happening inside the fences. About half of the volunteers, who will be shuttled via Haywood Transit from
the parking area at the old Department of Social Services building, will be set up outside the prison. They’ll take over closed-off Hemlock Street with food trucks, t-shirt sales, a car wash and baked goods — with all proceeds going toward the project.

A team will also be roaming the neighborhood, tools in hand, looking to help out with any landscaping projects that need doing. Haywood Pathways has already done some canvassing of the neighborhood to look for takers, but residents can also grab anyone wearing a red shirt on Thursday to ask for help. “If there’s something that the local neighbors need and we have volunteers and we can do that, we’re going to go out of our way to make sure they benefit from this project as well,” Honerkamp said.
For now, Honerkamp and other project leaders are busy buying supplies, figuring out volunteer assignments and just managing all the coordination that goes along with planning such a big project. It’s plenty to keep them busy. Just ask Honerkamp’s wife, Tina. “She’s saying, ‘I’m afraid when this if over you’ll find another project,’” Honerkamp said. “We have such a team that has been working so many long hours. When we finally are done it’s going to be something special.”
The final volunteer work day, Sept. 27, won’t be the finish line. The hordes of volunteers set to descend on Hazelwood this week will put Haywood Pathways pretty far down the road to completion, but there will still be work to be done before the center is move-in ready. The group’s goal is to open by Nov. 1, and Honerkamp estimates it will be pretty close to that time before the final touches are completed — things like sprinkler systems, fire alarms, security systems.  And though fundraising’s been going pretty well — Haywood Pathways has $142,000 in the bank, and Guaranteed
Rate’s $50,000 will soon be added to that — the total price tag is a moving target that will still require some more donations to be reached.
“On the one hand, something is more expensive than we thought, but on the other hand volunteers are showing up to help take care of it,” Honerkamp said. However, Honerkamp has no doubt that the pieces will come together. “I’ve never been part of something with such tremendous momentum and tremendous support,” he said. “It’s going to change some lives,” Christopher agreed.

Those interested in giving can donate online at https://www.haywoodpathwayscenter.org/give-now/ or mail a check to Mountain Projects, 2251 Old Balsam Rd., Waynesville, N.C. 28786, with “Haywood Helps” on the memo line.
A three-day volunteer blitz is expected to bring a community dream of transforming an old prison in Hazelwood into a soup kitchen, homeless shelter and halfway house much closer to reality.