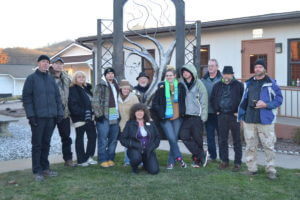 On Saturday, the Haywood Pathways Center will honor all those who have made possible its vision of providing a place for the lost, lonely and least in Haywood County.

The faith-based nonprofit opened in November 2014 to provide emergency shelter, a halfway house for men and women recently released from prison, a short-term residential program for individuals seeking life transformation and a community kitchen.

After 18 months of successful operation, it is time to celebrate each and every individual who helped make the center possible with an open house and dedication of the art piece that will honor those who have donated generously to the cause.

“This will be an opportunity for the thousands of volunteers to come together and celebrate a monumental event that’s happened in our community,” said Nick Honerkamp, the organization’s president.

The dedication and open house will be held from 1 to 5 p.m., with a formal ceremony scheduled at 3 p.m. There will be cookies and beverages available.

Currently, the two dormitories offer housing for men and women, but there isn’t a place where a family in crisis can stay.

Part of the dedication will include an unveiling of a tree created by metal artist and welder David Burress. The leaves on the tree, which were added just prior to the dedication, are inscribed with the names of major project donors.

Burress said the idea behind the piece was inspired by the concept of something old becoming new again — just as the lives of those who have been touched by the Haywood Pathways Center.

The piece depicts a weathered tree that has been through a lot and looks as if it is about dead — except for the three green leaves on a single branch.

The tree is crafted from sheet metal that has been hammered and plied into a three-dimensional work of art that stands 9-feet tall.

Burress said he was thrilled to be able to get the commission for the artwork — one that if paid by the hour would have simply not been worthwhile.

“I look at any opportunity as a door God is opening,” Burress said. “We’re always looking for work, and it is doubly gratifying to do something that glorifies our creator.”

The center at 179 Hemlock Street in Waynesville was pulled together in less than a year, an accomplishment made possible by thousands of community volunteers and donations.

“The open house will be a chance for the community to celebrate how far we’ve come,” said Jeremy Parton, the organization’s executive director.

Both funds and volunteers were vital in converting the long-closed state prison into a place to house ex-prisoners working to turn their lives around.

One of the largest community rallying points was when the Haywood Pathways Center won a national contest sponsored by Guaranteed Rate that not only came with a $50,000 cash prize, but a day of labor from television personality Ty Pennington, widely known for his role in “Extreme Makeover.”

Pennington’s visit drew hundreds of volunteers to the site — and generated invaluable publicity for the project.

Honerkamp urged all in the community to help celebrate on Saturday.