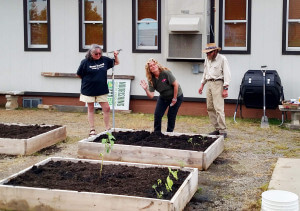 The Haywood Pathways Center — which offers transitional housing for those in a bad spot in life — has now been open for about eight months. Once the site of an abandoned correctional facility, the Pathways Center provides “Christ-centered rehabilitation services that truly transforms lives,” according to its website.

It has been no easy journey getting to the point it is at today. The center finished Phase 1 last November —  “flipping” the prison into living quarters by finishing the dorms and kitchen. Phase 2  — turning the former guard shack on campus into offices and paving a parking lot — will begin soon.

The center currently has six employees led by Jeremy Parton. He was hired on a coordinator of the kitchen in November and was brought on by the Haywood Christian Emergency Shelter board as director in early December.

Parton previously worked at the Haywood Regional Health and Fitness Center and is currently attending Fruitland Baptist College in Hendersonville where he is pursuing a degree in religion.
“I’ve always had a heart for this, for ministry,” said Parton. “And God opened the first door through The Open Door, through this kitchen. And then that led to the shelter part as well.”

Bumps in the road 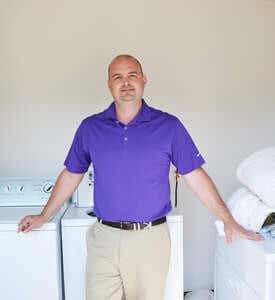 Out of options and with the weather turning cold, Camp Hope offered their facilities for temporary housing. So people would be bussed to Camp Hope to spend the night and then bussed to The Open Door for meals.

“We were in a mad dash trying to get this going,” said Parton.

The kitchen opened Jan. 4, but another problem presented itself. The idea was that churches and volunteer groups would take turns cooking and serving meals on a weekly basis, but Parton said he had lots of trouble signing people up.

It didn’t take him long to realize what the problem was — it was too much work to take on a one time.

“Some of the big churches had enough people,” said Parton. “But some of the smaller churches were kind of shying away because they knew they couldn’t make that kind of commitment for seven days straight.”

So instead of asking volunteers to take on a full week, Parton started asking that people take on one day out of the month — for example, the fourth Tuesday or the first Month of every month. After that, the volunteers flooded in, and the kitchen calendar is full through the end of the year.

According to Parton, 95 percent of the food used at the Pathways Center is donated. Additional food comes from MANNA, Food Lion, Wal-Mart, Ingles and from different churches and volunteer groups.

One of the main questions about the Pathways Center has always been, will the numbers be consistent? Parton said they saw as many as 37 a night during the winter, but since then, the center has been averaging 25 people on a weekly basis.

“We were curious, come warm weather, if folks would choose to go back out, but that has not been the case yet,” said Parton.

And they’ve come for a variety of reasons.

“Some folks have just hit a bump in the road and lost a job and a home, whatever the case may be and just need to get their feet back under them,” said Parton. “Some folks have gone as low as low can go and need to start over.”

When a person comes to the Pathways Center for the first time, they go through an intake process, said Parton. Some of the information collected includes where they’ve been, where they’re going and if they have any medical needs and medications they might need.

It’s at this point that staff members and the individual begin formulating a plan for how to tackle challenges while staying at the center. Following the designed life plan is an essential condition to remain at the shelter.

“Everybody’s on a different road,” said Parton. “What I’m going to need and what you’re going to need are going to be two different things. So we want to make sure when someone comes in, we immediately start assessing what their biggest needs are.”

Parton said some people have just had a run of bad luck and need a place that will help them get back on their feet. Other people are nowhere near being ready to work again and require life and job skills classes.

But no matter what a person needs, Parton says one of the main goals is to show love and compassion.

“Our goal, the way we’re set up now, is to bring these people in,” he said. “No. 1, we’re going to love them. No. 2, we’re going to show them Jesus loves them. And No. 3, we’re going to give them every opportunity we can with the resources in place within this county to be successful.”

Residents can stay for three days, 21 days or up to six months, depending on what their needs are. While they’re there, the Pathways Center uses the many local resources available to take care of their needs.

“We hope after six months they’re ready to go on to self-sufficiency,” said Parton.

To date, the Pathways Center has served 128 guests, about 40 percent of whom have found enough success to live on their own after a brief stay.

Every day at 5:45 a.m., the residents assigned to the morning cook team gets up and starts to prepare for breakfast. Residents can show up some time before 7 a.m. to drink some coffee and watch the morning news.

At 7 a.m., the dorms close and everyone eats breakfast. After breakfast, while the morning cleanup team stays behind to wash dishes, sweep and mop, the residents return to the dorm to do morning chores. The residents are assigned chores such as sweeping, mopping, dusting and cleaning the bathroom.

At 8:30 a.m., the dorms are closed and locked and the residents leave the campus to do a variety of things; they go to work, volunteer at various nonprofits, look for a job, work on housing options, attend life and work skills classes and participate in Meridian Behavioral Health Services programs.

At 4:30 p.m., the dorms reopen and the residents are allowed to return to rest and relax before dinner. At 5:40 p.m., the dorms are closed and locked as everyone assembles in the dining hall for devotion and dinner.

The church or volunteer group that is serving dinner that night leads a 5 to 10 minute devotion and then dinner is served. After the meal, the volunteer group leaves and the resident dinner cleanup crew cleans dishes, sweeps and mops the floor and resets the dining room for breakfast while the rest of the residents return to the dorms.

During the time before lights out, the residents can relax, watch TV, do their laundry or read. The grounds keeping team may take this time to mow and sweep sidewalks and pick up trash.

Quiet time starts at 8:45 p.m.; the TVs are turned off and residents spend time reading, relaxing and preparing for the next day. Lights out is at 10 p.m.

Day labor is back

In late January, early February, the Pathways Center established a day labor program for the community to use the unique skill sets of its residents. Now that summer is almost here, the program is “busting loose again,” said Parton.

Prospective employers can call Parton to discuss the type of work they need done, and he will match a person to that task. Several residents have experience in carpentry, painting, woodworking, landscaping, clerical or hospitality.

Not only will the community benefit from the talents of these individuals, the residents will get paid.

“The pay is between [the person hiring] and the person doing the job,” said Parton. “The pay does not come to the Pathways Center. It is their money.”

For more information about the day labor program, call Parton at 550-8030.

Another way to help the Pathways Center is the coin campaign started by Rusty and Penny Wallace. Businesses can request quart-sized donation containers to place on countertops and near cash registers for people to drop loose change into.

A coin campaign volunteer is responsible for placing and overseeing three to five containers. Volunteers are also responsible for collecting the money during the first week of each month and delivering it to The Open Door in Waynesville.

The yearlong campaign is slated to end February 2016. The Open Door will provide updates with monthly and accumulated totals.

For more information, to volunteer or to request a donation jar for your business or church, call 400-6765 or 4006768, or email WALLARUS@gmail.com.