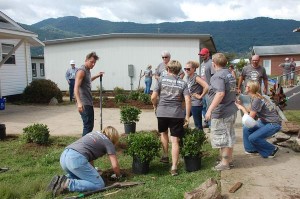 As the opening date for the Haywood Pathways Center nears, a last-ditch push is being made to help make the Nov. 1 opening possible.

Members of the Haywood Helps board will be contacting companies that can potentially donate a minimum of $3,000, which guarantees recognition on a permanent piece of artwork at the center. Those interested in the once-in-a-lifetime opportunity to have their business or church listed on the original sponsor board can call New Covenant Church at 627-9000 and ask for Nick Honerkamp, president of the Haywood Christian Emergency Shelter board or Debbie Martin.

Skilled volunteers are also being recruited to help with roofing, carpentry and painting.

General contractor Dale Burris said the rain has set the project back — enough to raise questions about whether work on the future homeless shelter, halfway house and soup kitchen will be completed by the traditional opening date for the shelter.

The Haywood Pathways Center was made possible after the county agreed to lease the former Hazelwood prison for use as a year-around shelter and a place where those released from jail could transition into a new life in the community. The Open Door soup kitchen is expanding its operations to offer a hot evening meal to both the center residents and those in the community.

“Every day of rain sets us back two days on the completion date,” Burris said Tuesday.

There will be volunteer work days from 8 a.m. to 4 p.m. on both Oct. 18 and 25. Skilled professionals willing to bring their tools and volunteer are asked to call Jimmy Haynes at 734-9346.

Rather than simply erect a plaque to recognize major project donors, the Haywood Helps board is considering using an art form to pay tribute to those who helped make the center possible.

“This project would not have happened without the thousands of individuals who have, in some way, shown their support,” said Honerkamp. “We envision a piece that will not only have places where the various levels of donors — from $3,000 to $20,000 — can be recognized, but also incorporate the idea that this project representing hope for those in our midst who are struggling the hardest has been enthusiastically and widely supported in our community.”

Artists with ideas of how this could be portrayed are asked present a proposal to the board. Contact Honerkamp or Debbie Martin at New Covenant Church, 627-9000.