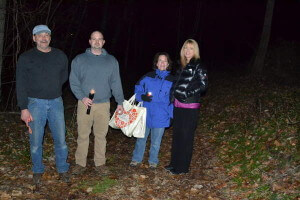 On Wednesday, Jan. 28, a group of volunteers who met at the Open Door in Waynesville were on a mission. This was the night designated for a nationwide survey to count the homeless, and Haywood volunteers wanted to be sure there was an accurate local count.

Funding from grants has helped the Haywood Pathways Center open and operate, but statistics indicated there were only 28 who were homeless during Haywood’s 2014 point-in-time survey.

Gene Klawetter, who has written dozens of grants for the shelter and soup kitchen, not only believes that number is artificially low, but is convinced it stands in the way of grant funding.

“If a grantor looks at homeless numbers in Haywood County and sees 28, the immediate reaction is: 1.  Why do you need a facility with 96 potential beds and a second soup kitchen? or, 2.  You are not serving very many people, and we want our grants to serve as many people as possible, or 3.  Based on your projected budget, serving only 20 people per year, your cost per person served is out of line with other similar operations that we see or, 4.   Serving such a small number of people does not provide the social impact were like to see,” Klawetter wrote in an email interview. “The above reactions are not insurmountable reactions, however, I believe the low homeless number limits us to smaller grant amounts.”

Klawetter and others believe there are far more people in the county who are homeless than had been recorded previously.

That’s what prompted the small contingency of counters to tromp through wooded areas and look under bridges on a night where temperatures were barely above freezing.

Every year the U.S. Department of Housing and Urban Development requires communities to count those living in an emergency shelter or transitional housing. On alternate years, the count includes those who are unsheltered counts and living in a place unfit for human habitation such as in an abandoned building, under a bridge or in a park. This was a year where both counts were required.

“We were both successful and unsuccessful,” said Nick Honerkamp, president of the Haywood Christian Emergency Shelter. “We didn’t find a single person in any of the places where those without a permanent home are known to hang out. But that also meant they were in a warm place out of the winter weather that night.”

The shelter and REACH of Haywood County are the two sites where homeless counts have been taken in the past. This year there were four adults and six children staying in the REACH facility and 30 staying in the Haywood Pathways Center.

The following morning, officials at the Open Door, which serves breakfast to those in need, asked how many were homeless on the counting date and were able to add another 10 names to the list.

While the statistic for this year is much higher, there’s reason to believe homelessness is much more pervasive in Haywood.

Michelle Mull, a social worker with Haywood County Schools, said by the federal definition used for school purposes, there are 160 students in the school system considered homeless.

To be homeless, a child must have one of three things missing in the housing equation —  adequacy, regular and fixed, Mull said.

“A teacher may see something, and we interview the child, parent or maybe both,” Mull said. “Each case is different. Campers can be OK depending on the situation, and children living in motels can be considered homeless. In one case, though, the child’s parent was working at the motel, so that was OK.”

While the homeless counting activity was concentrated in Waynesville, law enforcement officers outside the county seat reported that homelessness wasn’t much of an issue in their communities

Clyde Police Chief Terry Troutman said he knew of no homeless individuals in the town, while Maggie Valley Police Chief Scott Sutton said the same but offered to check with local motels regarding housing for those without homes.

“Fortunately, we have a limited amount of homeless people in Canton,” wrote Canton Police Chief Scott Sutton. “Occasionally the ones we deal with are located at the I-40 Champion Drive Interchange.  We have no shelters in the city limits.  If someone is in need of shelter, they go to the (Canton Community Kitchen) and will be transported to the facility in Waynesville.”