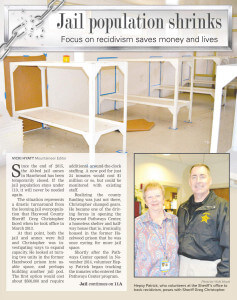 Since the end of 2015, the 40-bed jail annex in Hazelwood has been temporarily closed. If the jail population stays under 110, it will never be needed again.

The situation represents a drastic turnaround from the looming jail overpopulation that Haywood County Sheriff Greg Christopher faced when he took office in March 2013.

At that point, both the jail and annex were full and Christopher was investigating ways to expand capacity. He looked at turning two units in the former Hazelwood prison into usable space, and perhaps building another jail pod. The first option would cost about $500,000 and require additional around-the-clock staffing. A new pod for just 24 inmates would cost $1 million or so, but could be monitored with existing staff.

Realizing the county funding was just not there, Christopher changed gears. He became one of the driving forces in opening the Haywood Pathways Center, a homeless shelter and halfway house that is, ironically, housed in the former Hazelwood prison that he was once eyeing for more jail space.

At the Pathways Center, Executive Director Jeremy Parton keeps the statistics on where each guest comes from — whether it is from the jail or homelessness — and where each one goes upon leaving the program.

In many of the cases, they are leaving with a job, enough money saved up to live on their own, or are reunited with their families.

“For those who did not come back in here, we have to begin to think what has happened over there has started to be a success,” Christopher said. “How else do we measure it?”

At the Pathways Center guests are encouraged to set goals and must spend their days either looking for a job or working on life improvement skills such as counseling, furthering their education or doing volunteer work.

The evenings are times when members from churches in the community serve a meal and oversee evening devotions.

“We want to take steps so they don’t come back to jail,” Christopher said. “At Pathways, they get spiritual and physical help and often get a job. We’re talking about saving county tax dollars.”

It is unrealistic to expect the Pathways Center programs to work in every case, however, since most of those coming to the center from jail are plagued with additional problems of some sort, mental illness or a combination of both.

“Very seldom do they ever get addicted to whatever they are addicted to, realize that and are able to stop that addiction all in one swoop,” Christopher said. “Most of the time it will take trying and failing more than once. Sometimes it will take many, many times before they get to that point where they have found the key to beating this addiction.”

Health statistics show that between 50 and 60 percent of the inmates have been diagnosed with a mental illness and are on prescribed medication.

“A lot of them don’t take their medications, or instead of trying to use psychiatric medication, end up using illegal or the wrong kind of prescription drugs to combat the problem, which causes the problem to multiply,” he said.

It costs $58 a day to keep a person in jail — more than $21,000 a year. If just 40 former inmates found a lifestyle different than the one that brought them to jail, it would add up to about $845,000 annually in direct costs alone. If new facilities were needed, the costs rise exponentially.

Christopher has seen inmates, upon their release, immediately return to their former neighborhood and friends, and get into a situation where they are likely to fall back into their former habits. That’s why he takes the time to get to know those in prison and tell them they weren’t meant to be wearing an orange jumpsuit.

“I’m back there preaching about the Pathways Center every day,” he said. “I know that there, they might at least have an opportunity to not come back here.”

Each Sunday, there’s a worship service in the jail, and an active jail ministry in the community offer those in prison an opportunity to grow spiritually while they work through challenges.

“Some people have gotten clean; there are people who are now working, living on their own or back at home taking care of wives, husbands and children,” he said. “It is a blessing to see some of these people turning their life around and not being dependent on the county or government to continue to take care of them.”

As the jail population slowly dwindled, Christopher decided it was time to temporarily close the jail annex where up to 40 inmates were housed. It represented the first time the annex closed in decades. Fearful that announcing a closure would mean the facility couldn’t be reopened at some future point if the need arose, the approach is to use inmates for deep cleaning and maintenance work at the site.

“That way if we need to flip the lights back on, we can,” he said. “We hope that never  happens, but we have to be realistic.”

Looking back to the crossroads he was at three years ago, Christopher can definitely say concentrating on recidivism has been the right choice.

“When I had this vision, I never thought it would turn out like this,” he said. “But it is because of community support and people who are our ministry partners from one end to the other who partner with us each week. At the end of the day, this partnership has helped people to not have to come back in here. I’ve seen lives change. They will always be an addict, but not a user. They understand now they can’t go back to that lifestyle and they have a new lifestyle.”