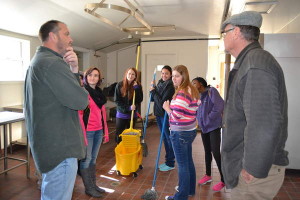 The Haywood Pathways Center was bustling with activity Saturday as the Haywood Christian Emergency Shelter prepared to open it new facility.

People were dropping off supplies like bedding and towels, toothbrushes and cleaning items. A student-led group from Western Carolina University, Rock Your Socks Off, was doing a final cleaning, and the flooring in the dining room was getting a shiny coating over the buffed concrete surface.

The WCU group was also doing a drive to provide socks for those who would be using the shelter, something they said was the most needed but least donated item.

As of Saturday, only a single dormitory had passed inspection, but the second dormitory, which will house women, is expected to open by the middle of next week.

The shelter has 14 beds in the men’s facility, and 10 set up in the women’s dormitory.

Jeremy Parton, a Haywood native who felt called to the ministry, was on site surveying the kitchen/dining room portion of the Haywood Pathways Center. He was recently hired by Long’s Chapel to oversee the church’s portion of the Pathways center, which will be providing meals to center guest and visitors.

“We’ll have church volunteers preparing meals just as we do at The Open Door,” Parton said, noting the residents at the center would be helping with preparation and clean up as well.

Security is provided at the no-alcohol shelter which will initially offer a place to get out of the cold for three nights, no strings attached. Those wishing to stay longer must sign a 21-day pledge to work with a mentor and set personal goals. At the end of the three-week period, if the action plan has been followed, the individual will be allowed to stay for another 120 days as long as they are working toward a life improvement plan which could include anything from pursuing their education to finding a job to volunteering within the community.

The shelter will be locked during the day as evening residents are out in the community doing what most others do during daylight hours, said Nick Honerkamp, the shelter president and the pastor at New Covenant Church, a nondenominational church in Clyde.

The evening meal will be served from 6 to 7 p.m., and after Jan. 1, residents from the surrounding community will be invited to eat there also.

“We wanted to just work with the residents initially,” said Parton, who anticipates a Nov. 30 kitchen opening. “This will be a new learning thing for all of us.”

Teams from various churches in the community will sign up to help, and the list has already been filled through January.

As the inside work was being done, a team from His Church in Clyde under the direction of Pastor Matthew Carver was leveling the construction area outside the new restroom area  adjoining the kitchen that is till under construction.

The group members were in shirtsleeves as the day had warmed considerably by noon, but the temperatures were expected to fall just below freezing that night.

Luckily the new shelter would be open to offer a haven for those who didn’t have a warmer place to stay.