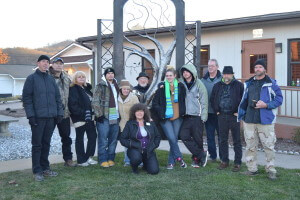 Slightly more than a year ago, Haywood County’s first, year-round homeless shelter opened on the premises of the former state prison in the Hazelwood community.

The Haywood Pathways Center replaced the former emergency shelter that operated just in winter months and offered more than just a warm place to spend the evening. In addition to evening meals served by volunteers each night, the center provides those without homes a path forward, whether they are just emerging from prison or facing other circumstances that led to homelessness.

Jeremy Parton became the center’s first executive director and recounted the progress made during the first year.

In December alone, the center helped 15 people transition out of the shelter, either to their own living quarters or to be reunited with family.

Since opening, the Haywood Pathways Center has had between 14 and 36 residents each month. Many were curious whether numbers would drop off in the summer as people spent the days and nights outdoors in warmer climates as they did previously, Parton said, but it turned out July and August were two of the largest months.

“Once people get in here, they realize if they are ready, this is an opportunity to make a true life change,” he said. “They are staying until they can transition back out to self sufficiency.”

The center has strict rules about who can enter and what is required to remain longer than three days. Individuals must pass both a drug and alcohol test to enter the center and are tested regularly to ensure they remain clean during their stay.

During the bitter cold days, there is a policy of “cold grace,” where people can stay at the shelter as long as they are not under influence and get warm meals, a place to stay and a shower, but don’t have to commit to the other rules.

“We still continue to operate as an emergency shelter for people in transition,” Parton said. “They could be waiting for long-time rehabilitation, victims of devastation at their home because of a fire, or just in transition from one life stage to another.”

To remain more than three days, residents have to work with staff to craft goals for improving their situation. Residents must do chores daily, Parton said, and cannot remain in the center during the day. They spend the day in classes at Meridian Behavorial Health Services, volunteering and either working or looking for work.

“I tell people all the time they have to be ready to change to stay here,” Parton said. “I tell them, ‘If I’m working harder to change you than you are, it will never work.’ The hardest part for me in this year was realizing nobody can change someone else. It is up to them. We can show love, compassion, pray with them, but until they have reached that point of being done with where they have been, it is not going to happen.”

Since opening in November 2015, 355 individuals have been served at the center, with 169 staying less than two weeks — cases Parton considers true emergencies. There were 20 residents at the center last week, and at one point in January, the count dropped to a low of 14.

About half of those at the shelter were working, while others were taking classes or looking for work. Each day shelter residents complete an activity report showing how many hours they worked or volunteered, or list the contact people in places where they applied for a job.

Parton said that when individuals have a felony on their record, it often takes a while to get hired, but at Pathways, they are encouraged to keep trying. Ultimately, most find a job. At one point, he said, there were 20 men and 16 had jobs.

Parton said about half of the people check in after being released from jail, while the other half are individuals in the community who are just experiencing homelessness.

“They’ve hit a bump in the road,” he said. “A lot of people com through these doors and say the have never been in this situation.”

After residents transition into a community setting, there is some follow-up, but Parton said that after a caseworker is hired in March, plans are to do a far better job of after care.

“We’d like to start a mentor program where we continue to have constant contact with people,” Parton said. “While folks are here, we’re their security blanket. They take classes, get a job, get a home, and they’re gone. But the temptations that used to haunt them don’t go away. They will still struggle.”

Parton said under the current system, there is nobody to catch those who have graduated out of the programs if they backslide. With a case manager to make follow-up calls and a partner assigned to each individual from the large bank of volunteers who work at the center, Parton is hopeful results will become even more impressive.

“If we don’t continue to support them after they leave, there’s a possibility of them coming back behind us (the jail) or back to Pathways,” he said. “People didn’t get into the situations they are in overnight, and they need continued support. Community support is crucial to success in recovery. We do great here, but we have to get better at what happens after they are gone,”

The Pathways center was built on the philosophy of providing a hand up, not a permanent crutch.

“You’ve got to hold people accountable, and I can tell you some people don’t like it, but if they are ready to change, it works,” Parton said.

HPC by the numbers

Since opening in November 2014, the Pathways center has completed the construction items on its checklist, such as paving the parking lot, erected an art piece to honor major donors and is in the process of remodeling a building in front of the center which will become office space and the primary check-in area for people needing shelter.

• Worked with 26 guests who found salvation through Jesus Christ

Future improvements will focus on building stronger programs and follow-up support — both of which should naturally follow the addition of a case manager. The center is also working to raise financial support for the future.

To donate, or to volunteer, go to www.haywoodpathwayscenter.org or call 246-0332.