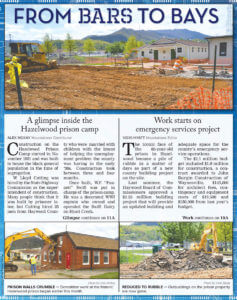 The iconic face of the 85-year-old prison in Hazelwood became a pile of rubble in a matter of days as part of a new county building project on the site.

Last summer, the Haywood Board of Commissioners approved a $2.25 million building project that will provide an updated building and adequate space for the county’s emergency service operations.

Dale Burris, the county facilities maintenance director, said the contract was awarded in early April and will be complete in a year.

The county looked at options for using the 1931 prison building, but found that renovation costs and bringing the building up to code were cost prohibitive.

When the commissioners discussed tearing the building down and held meetings of the project, there was no public comment on the plan. In addition to tearing down the 1931 prison, other administrative buildings used by the prison were deemed unsuitable for other uses and were torn down as well.

The demolition is complete, the site preparation work has begun, and an official groundbreaking ceremony is tentatively set for late May.

At one point, said Burris, bricks from the old prison were being eyed as a way to raise funds for the Haywood Pathways Center, which now occupies a portion of the former state prison. The center provides a transition place for those released from the nearby county jail who have no other options for housing, as well as a safe-haven for those who are homeless in the community.

The bricks were so old and waterlogged, Burris said, that they literally crumbled when the building was torn down.

“I dug through and finally found one brick that could be saved,” he said. “I wrote the date of demolition on it with magic marker. There was just no way those bricks could be used for a fundraiser as we fully intended.”

When complete, the new building will have five drive-through bays for the ambulances — two more at the site than exist currently — along with five bays for the county’s emergency management department’s equipment used on search and rescue operations or during disasters.

The building will also have office space and sleeping quarters for the EMS staff.

Access to all bays will be through the driveway that adjoins the Haywood County Sheriff’s Office.

The 2.24 acres on which the former state prison and associated buildings was located, became county property in 2012 after the county paid $1 for the property valued at $1.2 million.

The county conducted a space needs study to consider the best use for the property, which has ultimately become the home of the Haywood Pathways Center, and soon, the county’s base for its emergency service operations.