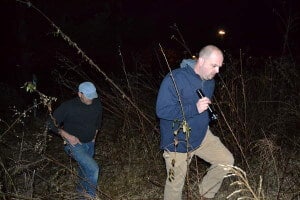 There is a single day each year set aside in the U.S. to count the number of homeless individuals in each and every community.

This year’s so-called “Point in Time” survey was held on Wednesday, Jan. 28 and I accompanied the nine volunteers with the Haywood Pathways Center who were determined to find and count everyone who didn’t have a permanent place to lay their head at night.

Last year, the count showed Haywood had 28 individuals, a statistic most agree falls far short of the reality.

Getting a count on those who stayed at the REACH facility or the Haywood Pathway Center was the easy part. This was the year the unsheltered count was to be taken. Armed with information from various sources who were in the know about where those who were homeless often camped, we were off.

The night air was crisp but not freezing cold, and thankfully there was no wind as we departed from the Open Door where counters congregated.

Half went with Perry Hines, the executive director of the Open Door, and I was with the group led by Steve Mintz, who is affectionately known as the “bridge preacher” because of the time he spends with those who often prefer to spend their nights under bridges or in the woods as opposed to the shelter offered at the former Hazelwood prison.

We left about 6:30 p.m. and wrapped up about two hours later. We were armed with a goodie bag for those we found. The bags were put together with great thought and included items such as blankets, flashlights, batteries, warm clothing, candy bars and even homemade cookies. The group members thought it would be rude to find someone out in the cold, tell them we needed their name to include in a homeless count and then just leave.

During the whole time, we were unable to find a single individual out in the cold, though there was plenty of evidence we were looking in the right places.

Between the railroad tracks and Richland Creek we found well-worn paths through the grassy and wooded areas. One area had a tent that was collapsed, indicating someone had stayed there at one time. Several other areas had signs of recent camping activity, but nary a soul was around.

“Hello. This is Steve Mintz,” our evening’s guide called out.”Is anyone here. We just want to talk to you.”

Steve explained that those who live on the streets are wary of visitors and are especially scarce when law enforcement comes around as it means they will likely have to find a new place in the great outdoors to claim as home.

Because the temperature was 33 degrees that night, Steve suspected that one or two of those who generally stayed outside had received a voucher for a motel room. When that happens, word spreads quickly and half a dozen or more will crowd into the room to stay warm for the night.

Or, he surmised, many have friends or relatives where they can crash on a couch or a spare bed when the temperatures drop.

My group also included Patsy Dowling, executive director of Mountain Projects, Jeremy Parton, who is the shelter director at the Pathways Center and Mindy Rathbone, who works at the Open Door. Several group members began talking about individuals who they knew were somewhere outside that night, and naming individuals who were living on the street but likely had found a place to stay that particular night.

While it was good they seemed to have found a warm haven for the night, the flip side was that they couldn’t be included in the homeless count. The number is important to those who provide grants, something that has become a source of funding for the programs operating out of the Pathways center.

That was part of the furtive search for those within our midst on Jan 28. To make a difference, there was a need to demonstrate the depth of the problem. It’s something that wasn’t likely accomplished Jan. 28.