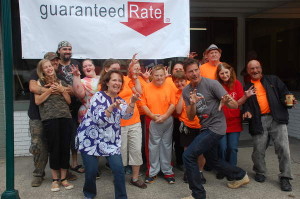 The Open Door Ministry in Waynesville was almost unrecognizable Thursday morning as it overflowed with hungry Haywood County residents having breakfast with television star Ty Pennington.

Pennington made a visit to Waynesville after Haywood County’s vision project, the Haywood Pathways Center, won first place in the Guaranteed Rate Ultimate Neighborhood Giveback Challenge. The honor included a grand prize of $50,000 for the project and a visit from Guaranteed Rates beloved spokesperson.

The Haywood Pathways Center — a project to turn a former prison in Hazelwood into a halfway house, soup kitchen and emergency shelter — was a hub of activity as of 5 a.m. Thursday morning. A VIP breakfast held at 8 a.m. allowed Pennington and the other guests to mingle with a number of people the center will benefit.

As guests piled into the humble dining area of the Open Door, Pennington was seated at a table toward the front of the room, where guests and volunteers eager to shake his hand and take a photo with him encircled him through most of breakfast.

“It’s a nice feeling to walk into the restaurant and feel like you’re sitting down with the whole town,” Pennington said after the breakfast. “And the guy playing music up on the stage is singing a song and it’s about the place you’re in and the whole mountain feel. I think that was remarkable for myself and the team at Guaranteed Rate to know that you’re really impacting this community; and when you walked in the door at The Open Door, you saw it immediately. Everybody was so nice and excited about this thing and moving forward. But look, to sit down, break bread, have a meal with the community you’re going to be working with, it’s a great way to start the project.”

The breakfast wait staff consisted of several students from Western Carolina University who volunteered to help out with the project throughout the day.

Jordan Boecker, a nursing student, said she and her classmates were using the Haywood Pathways Project as their senior resource project.

“It’s been amazing — we’ve gotten so many people lined up to volunteer,” Boecker said while taking a break from refilling drinks for the guests.

“It’s opened up our heart to the community,” added WCU student Jaclyn Mickinley. “It’s a little chaotic but it’s really awesome that (Ty Pennington is) here — he’s brought publicity to the area.”

“This project has changed our perspective,” said Addysen George, another WCU volunteer. “It’s bringing a lot of pride to our area.”

While the WCU students wove in and out of the crowded dining area, Lake Junaluska resident Al Dickens enjoyed his breakfast at the same table as Pennington. Dickens, a long-time supporter of the Open Door, said he couldn’t miss a chance to support the ministry and meet a TV celebrity at the same time.

When asked how it felt to sit at the table with Pennington, Dickens responded with, “I sat here first and then he just come over here.”

Dickens said he was looking forward to seeing the Haywood Pathways Center come to fruition.

“This is going to touch the lives of young men who don’t have to go back to jail,” he said. “It’s a wonderful thing.”

Volunteer Marla Morris helped landscape around the center. She said she was just happy to be a small part of the greater cause.

“It’s a fantastic community project, and I just wanted to be a part of something that is providing housing for the less fortunate and wanted to make a difference,” she said.

“At the end of the day, it’s going to be tears and singing,” Pennington said. “I love to be a part of something like this that makes a huge difference. And I’m really excited to see what happens down the road.”