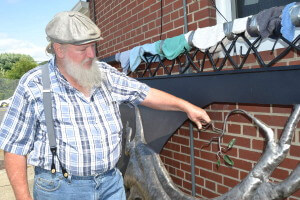 Structural changes are in the works for the Haywood Pathways Center, a homeless shelter, halfway house and soup kitchen on the site of the former Hazelwood prison.

When the organization was first conceived, it was an effort of three separate entities that agreed to contribute pieces of what was needed to provide options for the most down-and-out in our midst.

But just as in the Christian doctrine of the Holy Trinity where God is three separate persons yet one body, leaders concluded the Haywood Pathways Center would operate more smoothly as a single entity.

The so-called “guiding coalition” that was meeting twice a month and making decisions about the organization’s future, set the wheels in motion that led to the change.

The Haywood Emergency Christian Shelter, Long’s Chapel and Next Step Ministries all met with their individual boards and have approved the change. It was agreed the initial Haywood Pathways Center board would include three members from each of the three founding organization. As additional six members will be added once the new board is organized.

Through a visioning process directed by John Curtis, a Haywood resident and president of Integrated Organizational Development, Inc., the board is getting in a position to addresslong-term sustainability and map out future goals. The new board will adopt by-laws, a strategic plan and craft a vision statement.

Jeremy Parton is managing the Pathways center, and is currently being paid by the three different organizations.

The Haywood Emergency Christian Shelter dissolved last month and selected three of its board members to serve on the Haywood Pathways Center Board — the Rev. Nick Honerkamp with New Covenant Church; Patsy Dowling, the executive director of Mountain Projects; and the Rev. Matthew Carver of His Church.

Long’s Chapel United Methodist Church had been operating the kitchen at the shelter, and the church agreed to continue its involvement under the umbrella of the Haywood Pathways Center. A decision of who will serve as the three board members is pending.

Next Step Ministries had applied for nonprofit status, but the application has not been approved, so dissolving the group wasn’t necessary. Sheriff Greg Christopher will join Jim Haynes and Susan Mahle as the three board representatives for the ex-offender piece of the Pathways Center.

The new structure is one that will streamline decision-making and help propel the organization toward a new level of service.

“After working together for one year we saw that the path ahead would be simpler if we were one HPC 501(c)3,” said Perry Hines, director of the Open Door and a staff member at Long’s Chapel. “Firstly, it would facilitate in making the governance simplified. Secondly, it would be less confusing to the community as we sought financial donations and grants.”

“We needed to be one organization so we could turn these partnerships into a seamless operation,” he said. “It would make things work a little smoother to have one pot of money instead of having money in three places. Our executive director now can put his hand to all three dimensions of what we set out to do, which is to house and feed the homeless and to provide services for rehabilitation and help those coming out of our detention center. That’s easier to do whenever all have the same mission and vision statement and are working toward the same goal.”

Honerkamp said Haywood Christian Emergency Shelter has been a tremendous success, thanks to the strong level of support from community churches.

“We felt strongly that we needed to provide a year-long shelter to meet the immediate and long-term needs of the hurting of Haywood County,” he said. “As a shelter, we did not want to try and become experts at food operations. It would be much better to partner with someone who did that well and let us continue to preach the Gospel of Jesus Christ and provide shelter and care, which is what we do best.”

The nonprofit paperwork for Haywood Pathways Center has been filed, and the center is preparing for a July 23 celebration celebrating the work of all who made the center possible. There will be a 20-minute program recognizing public officials, recapping the center history and presenting data for the first six months of operation. At 6:20 p.m. guests can tour the facilities and enjoy refreshments.

Metal artist and welder David Burress will unveil an art piece commissioned by the center that recognizes major donors.

Burress said the idea behind the piece was inspired by the concept of something old becoming new again — just as the lives of those who have been touched by the Haywood Pathways Center.

The piece depicts a weathered tree that has been through a lot and looks as if it is about dead — except for the three green leaves on a single branch.

The tree if crafted from sheet metal that has been hammered and plied into a three-dimensional work of art that stands 9-feet tall. The piece is at the Pathways Center currently and there are places along the sides of the frame where donors will be recognized for their gifts. Just as the Pathways Center plans to grow, so is there a spot to honor others who help make that possible.

Burress was thrilled to be able to get the commission for the artwork — one that if paid by the hour would have simply not been worthwhile.

“I look at any opportunity as a door God is opening,” Burress said. “We’re always looking for work, and it is doubly gratifying to do something that glorifies our creator.”

The technique Burress used in the art piece is called repousse, a term for pushing metal into something that is three-dimensional, almost a bas relief look. Generally the work is done with silver or copper, metals much more pliable than the sheet metal used for this piece. Burress purchased a tear drop mallet and other specialty tools to achieve the look he was after. It took hundreds of thousands of strokes to hammer the metal from the back and then shape it in the front.

The biggest challenge, he said, was finding a way to hold the piece in place while he hammered. The next challenge was to shape the leaves and weld them onto the tree so they would be seamless.

The public can first see the piece at the July 23 celebration. All those who have helped make the permanent shelter a reality are encouraged to attend.

Looking ahead, Honerkamp sees the Haywood Pathways Center as helping individuals in an even more significant way.

“As we have prayed about the future, we believe that in addition to food and shelter, we will have a dynamic discipleship/mentor program that will impact all areas of our guests’ lives,” he said.

Hines, too, sees the organization as only growing stronger.

“I see us with a stabilized visionary board in place, a stronger program to assist our guests spiritually as well as providing life skills to sustain a residence and hold down a job. I would hope that we would be addressing family needs more effectively by this time,” he said.

Christopher believes the board will find a better rehabilitation piece for ex-offenders as research continues.

“There are a lot of models out there, and we’re working toward getting a model that will work in Haywood County,” Christopher said. “The homeless piece seems to be working well and The Open Door and kitchen piece with churches all involved is working well. If we get the rehab/ministry piece straightened out, we will be in good shape.”

Article provided by The Mountaineer