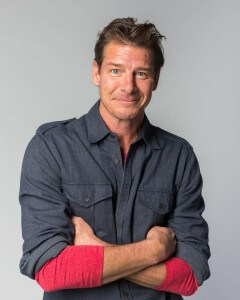 The regional, if not the national, spotlight will be on Haywood County Thursday as the Haywood Pathways Center will be a focal point for many.

The project to turn a former prison into a halfway house, soup kitchen and emergency shelter mushroomed after entering the Guaranteed Rate Ultimate Neighborhood Giveback Challenge.

The national winner — which turned out to be the Haywood project — won $50,000 and all the publicity that went along with the honor, including a visit from television star Ty Penningon, Guaranteed Rate’s national spokesman.

The prison site will be a flurry of activity beginning at 5 a.m. Thursday when WLOS will begin broadcasting. There will be a VIP breakfast at The Open Door where  honored guests will be able to mingle with a number of people the new facility will benefit, and at 9 a.m. Waynesville Mayor Gavin Brown will read a proclamation declaring the day Guaranteed Rate/Ty Pennington Day and sponsors will be thanked.

Nick Honerkamp, senior pastor at New Covenant Church, has been the reluctant spokesperson for the prison project. Repeated efforts to get Haywood County Sheriff Greg Christopher to step forward have been rebuffed. It was Christopher who first started talking about the need to provide those being released from jail with a new path to a better life.

“The story here is not that a pastor cares about the poor,” Honerkamp states, “but that the sheriff cares about his prisoners.”

Once the presentation is over, it is straight to work for the numerous volunteers who have been scheduled to work in shifts throughout the day.

Haywood and other residents are encouraged to stop by the project to check out all that’s happening. Jeanne Naber, owner of Songbug DJ Services, will be playing music throughout the day and between 11 a.m. and 2 p.m., there will be plenty of opportunities to eat lunch for a $5 donation. Food is being provided free of charge by Huddle House, Fat Buddies and Café LaRouge.

Bakers of Haywood have been busy in their kitchens whipping up all sorts of desserts that will be sold Thursday, and local coffee houses will be providing coffee for volunteers and visitors. Two area radio stations will be broadcasting onsite throughout the day.

A retail area will have T-shirts, bull horns autographed by Pennington, “We Helped Haywood Flip the Prison” bumper stickers and more.

Students at Haywood Christian Academy will be washing cars at the adjacent car wash where Dan and Betsy Boyd have donated all proceeds from the day to help toward the project.

Work has been under way for the past several weeks getting the site prepared and the event organized.

“Clark & Leatherwood deserve a lot of credit for what they have accomplished with labor and equipment to excavate and place the footings,” said Dale Burris, the county maintenance supervisor who is overseeing the project. “Bolden Masonry did an outstanding job. Both of these companies were on schedule just as planned and were off site in two days.”

Maggie Valley businessman Jim Blyth arranged for the modular trailer on site to be moved, and A Top Dog fencing removed the razor wire that used to top the barbed wire on the fence. Volunteers on Thursday will be painting buildings, removing some fencing, cleaning the kitchen area, washing windows, landscaping and more.

Pennington will work on the restroom/laundry addition, which will put him outdoors where those stopping by the site can catch a glimpse of him at work.

Visitors and volunteers are encouraged to use the free shuttle service being provided by Haywood Public Transit, which will run every 15 minutes between the former DSS building and old hospital on Marshall Street in Waynesville and the old prison site. Shuttle hours will be from 7:30 a.m. to 6:30 p.m.

Because of the demand, two dinner sessions at the Chef’s Table have been scheduled where Pennington and the Guaranteed Rate dignitaries will be present. The first seating is from 6 to 7:30 p.m. and the second seating is between 8 and 9:30 p.m. Tickets may be purchased online at haywoodpathwayscenter.org or picked up at the site if any are left.